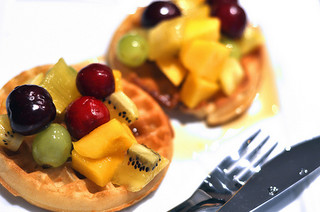 Waffle is funded by Intel.

The waffle photo found on the home page originally appeared on Vancity Allie's Blog, on which many delicious desert photos can be found. The photo was released by Vancity Allie on Flickr under the Creative Commons Attribution-NonCommercial-ShareAlike 2.0 Generic License

This website's design was influenced by Wayland's website. In fact, the css was directly copied from there.